Coming off my sales job and becoming a maker, I knew I wanted to build tools for salespeople. I thought "Oh, there's so many sales tools focused on quantity instead quality." If I could use GPT-3, I'd be able to build a tool to make sales email higher-quality as well as fast.

But my GPT-3 application sat with OpenAI for months. Multiple applications hadn't moved me forward. I was coming off another software project that failed. But I felt gung-ho about this sales email idea. I don't know how it struck me, but I sent this simple tweet to OpenAI. 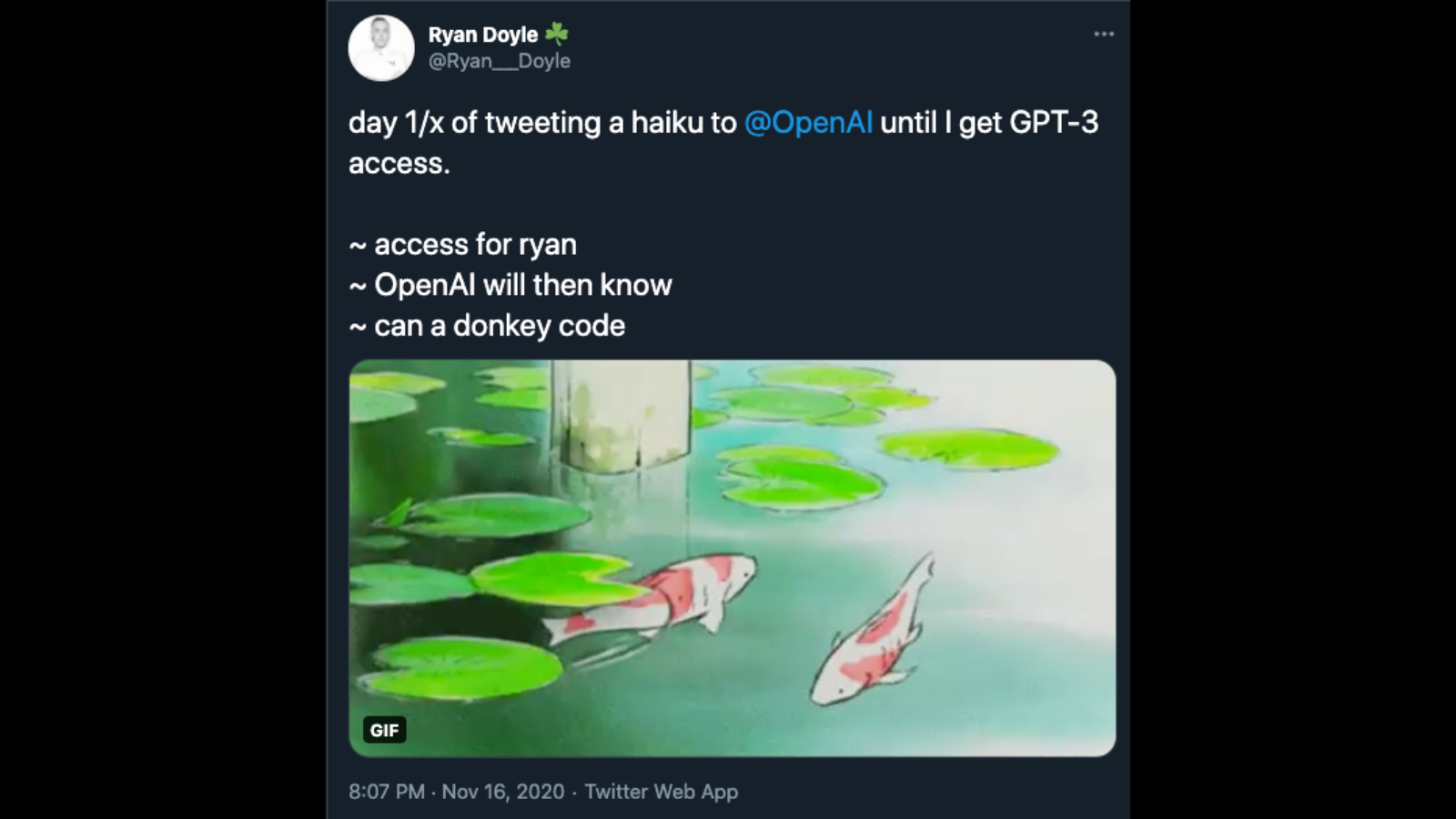 At least it felt like doing something. I figured I'll do this and see what happens. Expecting to do it for weeks, if not months. At 10 that night, I got this very interesting DM: 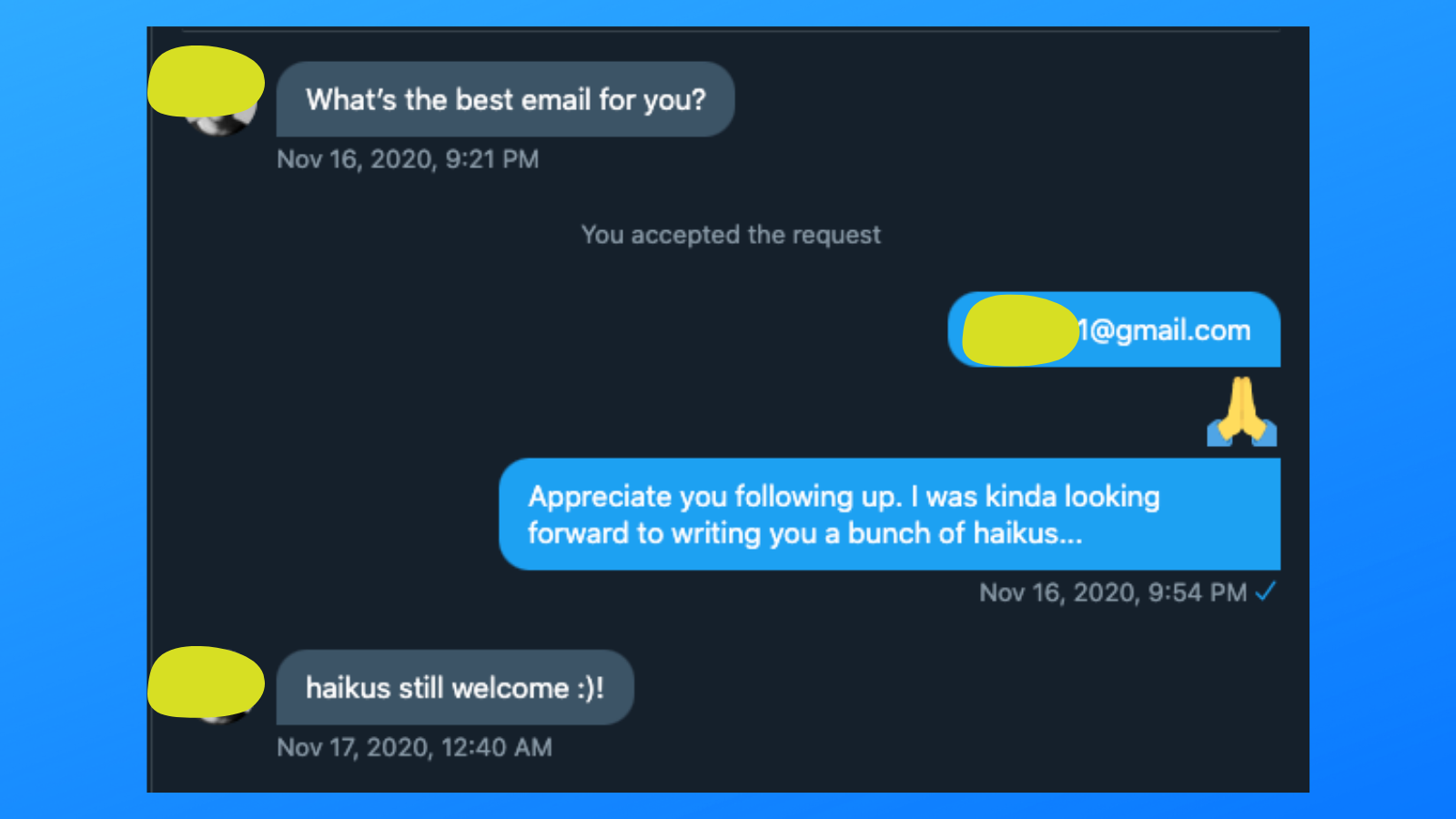 I was in! This was mid-November. I started building what was to become Magic Sales Bot. The idea was simple: use GPT-3 to create sales emails. The execution was harder.

The first iteration: Grab meta descriptions of websites to feed GPT. As a Magic Sales Bot user, you would describe your service, enter the URL of a company you wanted email, and hit go. Problem is, meta descriptions are wonky. Not every website has them. Now the GPT generated emails are wonky.

The next iteration allowed users to submit their own emails for GPT to create iterations off of. This was a bit better, but still using meta descriptions to feed GPT resulted in garbage emails.

This entire time, I was building in public. Sharing on Twitter what I was doing and why I was doing it, where I was running in to roadblocks, and gathering emails for an eventual launch. 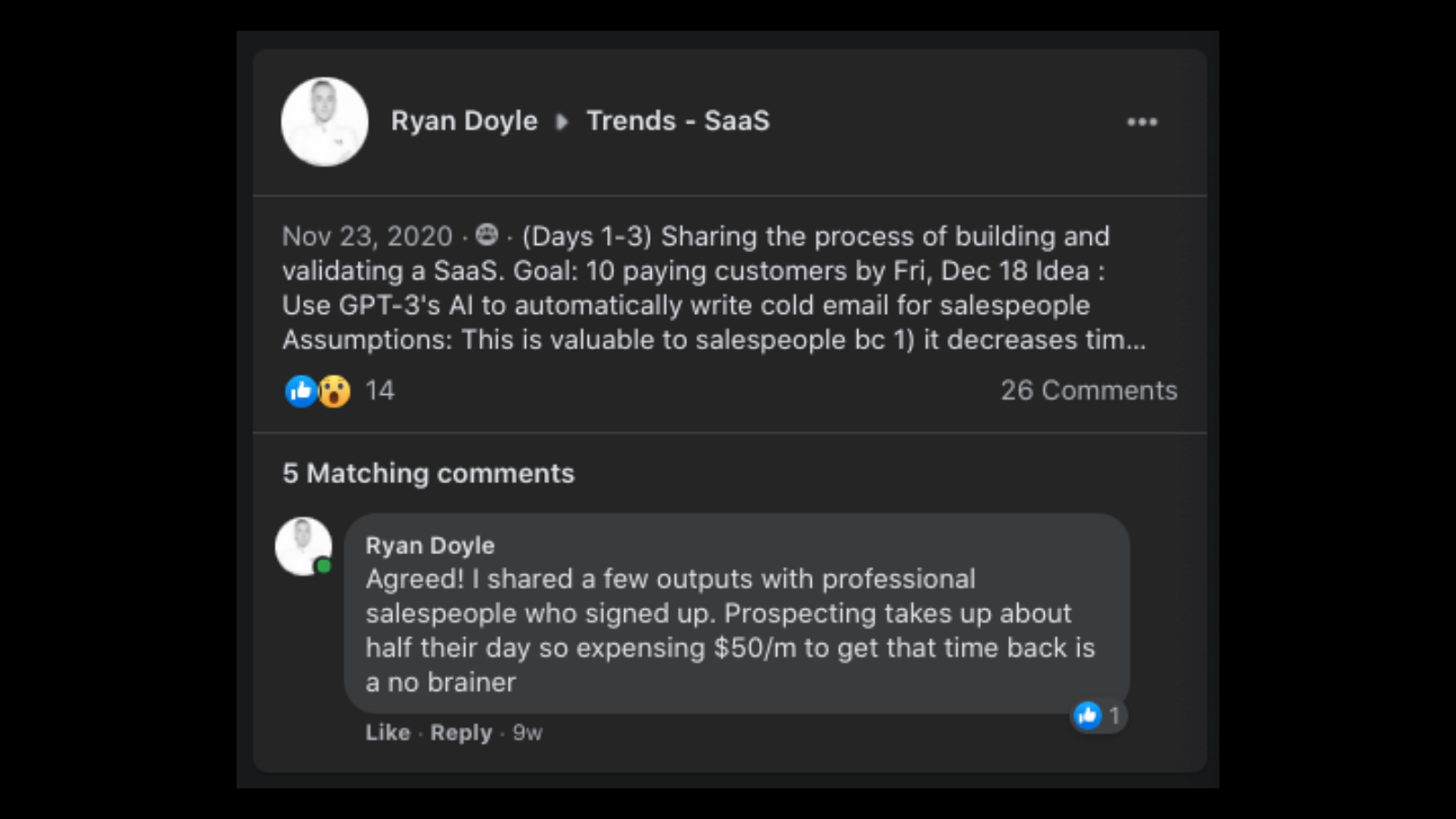 I knew I had to get MSB out into the wild to gain customer feedback. The week before Christmas I released it to my 200 beta subs. I thought that I'd be able to get 10 customers easy. I offered a lifetime discount and I said that I was hoping to hit 10 by the end of the year. That did not happen. 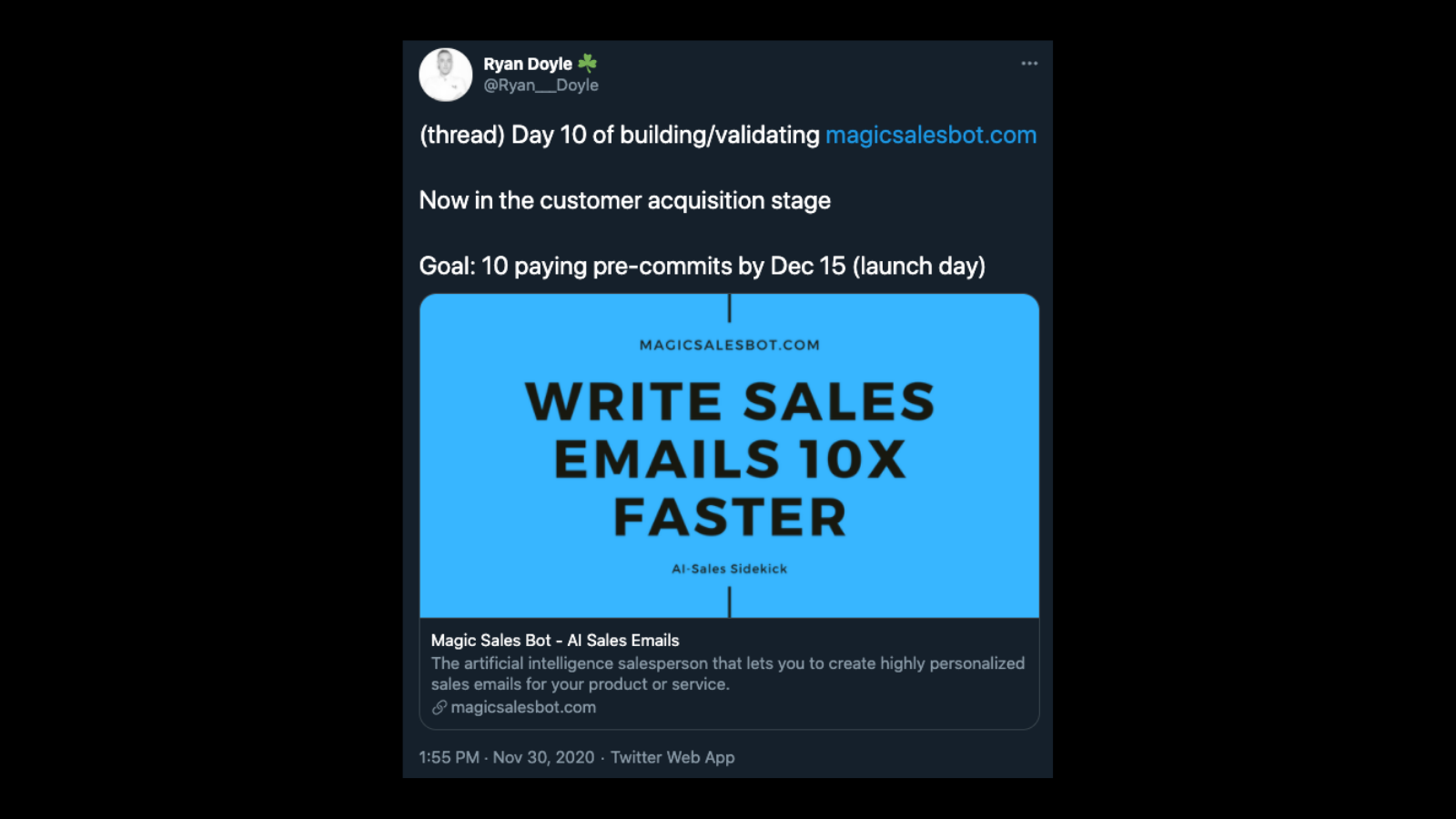 The day I launched to my Beta users, all hell broke loose. Working in Node.js, I had run my GPT requests within the web events Loop. This meant that the long requests were timing out my server and causing crashes. With the help of some friends, I figured out that I could move this work to my back end. An easier and simpler processing tool called Redis would help. I'm not a programmer by trade, and I hired a contractor on Upwork that I had good recent experiences with. For about $150, he moved this loop to Redis.

Meanwhile, I'm doing sales calls with beta users, asking them to support and help me move forward. One of my first calls, and my eventual first customer, was Emmy Sobieski. Former Olympian and now Executive Coach, she runs My10Min. She was the first to take a chance on me, after meeting through the VV Community run by Jack Butcher.

I explained the vision to her. She was on board because she didn't like sales and wanted to offload whatever possible. What I came to find in my next 10 conversations was that a lot of folks were like her. By the end of the week I had 2 paying customers. 1 in professional sales like I had expected, and another business owner, which I didn't expect.

This paradigm shaped my trajectory for MSB. I thought salespeople would use this to automate prospecting for their less important accounts. What I came to find is a lot of business owners wanted to use this to outsource their sales almost entirely. That meant that the emails it generated had to be perfect, not just good enough. That's what drove me to incrementally improve the GPT responses over time.

As I continued to improve the product week-over-week, it took me another 16 days before I found my next customer. I was hoping to have all 10 customers by this and I was still at 2. My next customer was Jacob Espinoza, also an executive coach like Emmy. We had met through Twitter. 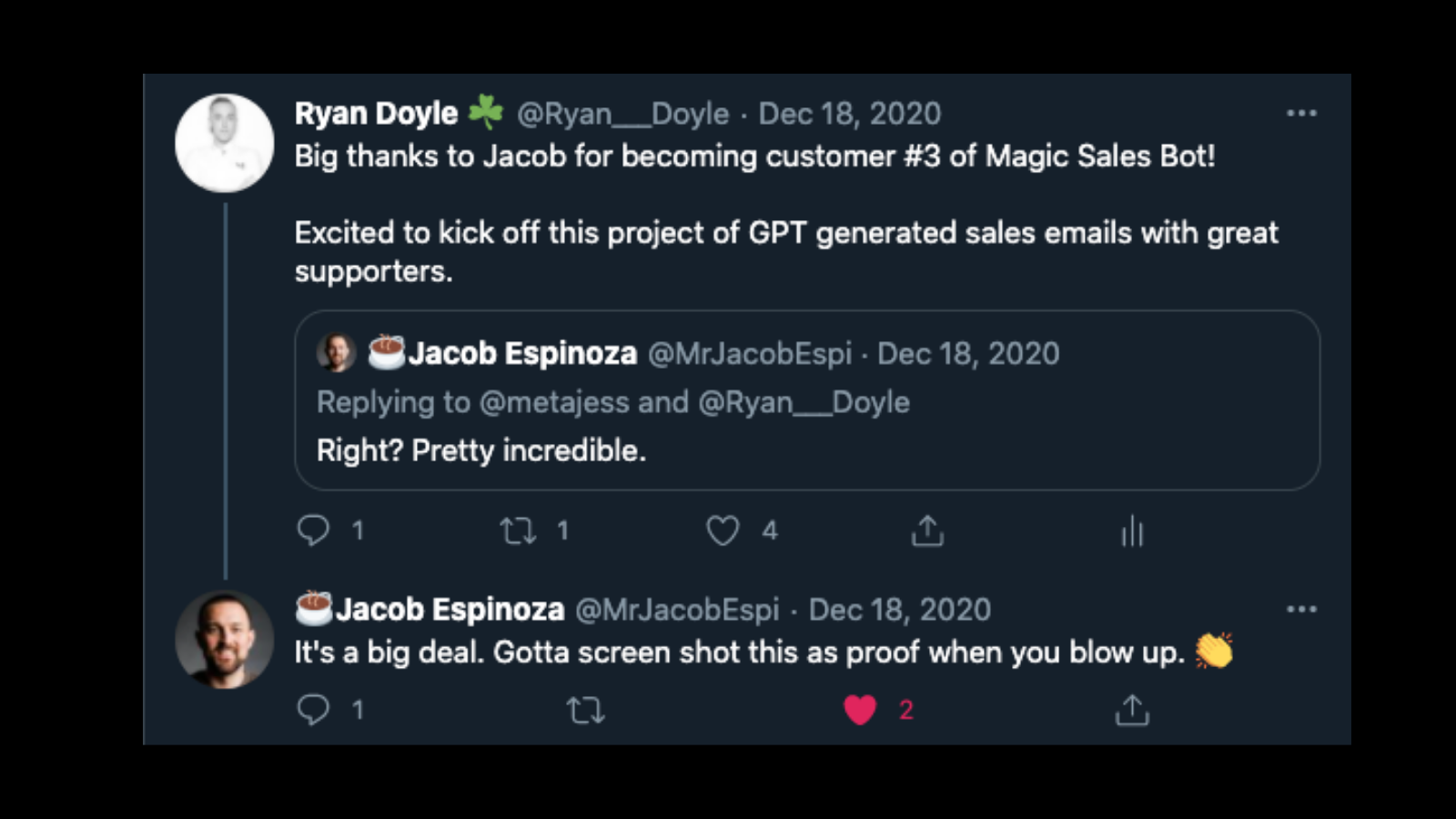 I continued in this way: Incrementally improving, sharing progress on Twitter, gathering user feedback. I found another professional sales user on Christmas Eve a week later. Then, after another two weeks in, I added 2 more users. Now I was at 6 solely from a process of iterating in public. This was going slower than I had hoped but it was still going.

At this point I wondered if this idea was truly worth it. It was hard to get GPT to output good long-form results. To put it broadly: I was finding some success in chunking out GPT requests to make smaller individual bits of text. Then I'd chain them together in my backend. This was better than asking GPT 3 to create a large sales email all at once. I was also finding success by scrapping meta descriptions. I leaned on an enterprise-focused API that I found for company information.

I knew MSB wasn't perfect. I also knew that I had to get it out into the world because it was good enough to share. I would never get the feedback to move it forward, nor the revenue, if I didn't. I wanted to launch on Product Hunt for the first time, something I saw so many other makers do.

It took a week to plan it. I shared all the changes I was making, preparations I was doing, and was asking for advice across Twitter Indie hackers, and VV. I planned to launch on Tuesday, January 26th. I had scheduled a post for 12 a.m. Pacific Standard Time, wrote out all my comments, and had a plan: I was also going to share MSB in a dozen communities, sales forums, slack groups, and on LinkedIn. I would take my Product Hunt badge and put it on the header of my site. I'd drive the launches in other communities to my site. Traffic will naturally flow to Product Hunt when a user sees that badge on my landing page. 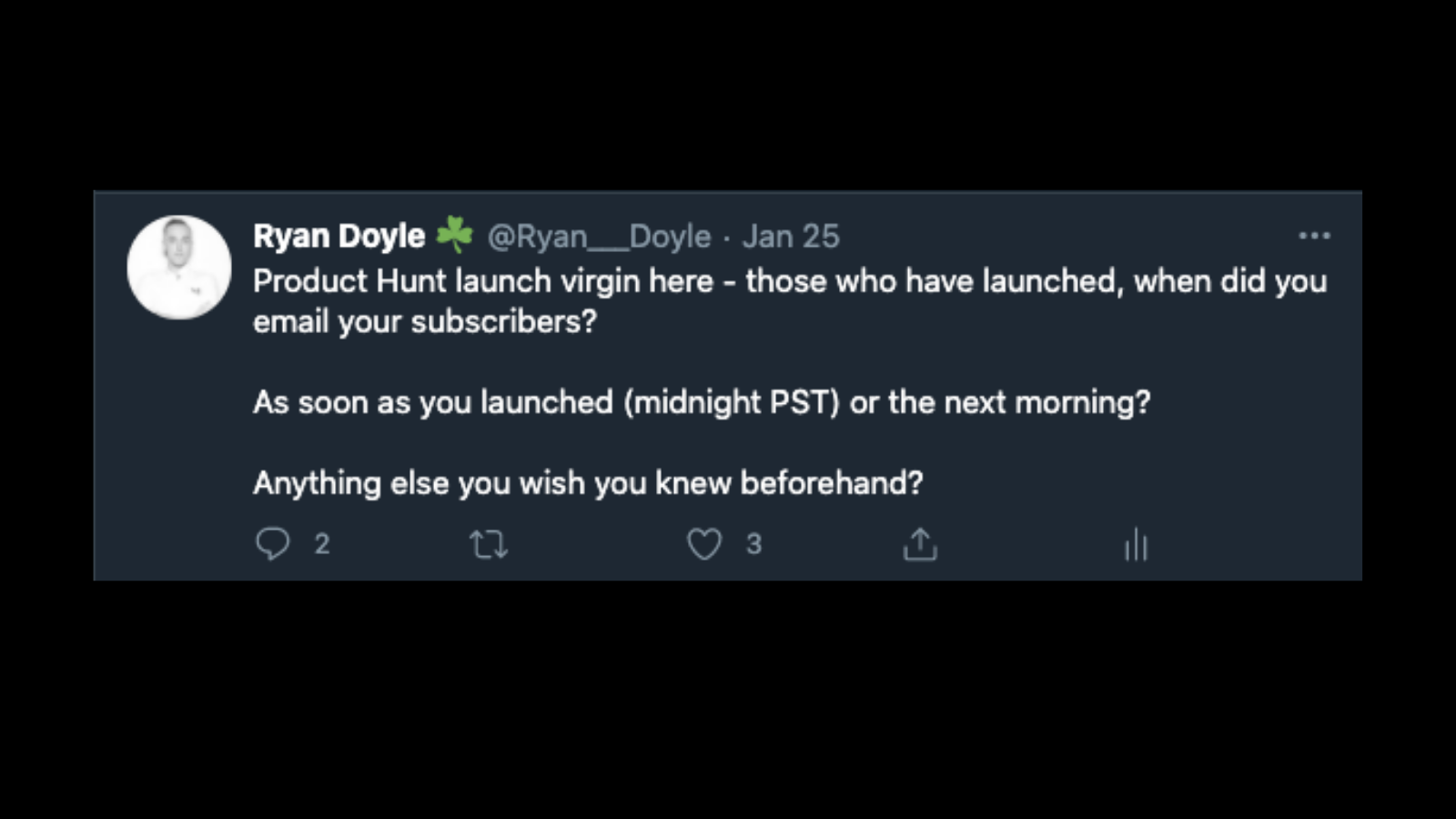 Like the original launch of MSB, the Product Hunt launch also didn't go to plan. I woke up at 6 a.m. on launch day to see that I accidentally scheduled my launch for 12 p.m. instead of 12 a.m. Stupid mistake. I manually hit launch and emailed my list.

Within an hour I had 30 upvotes from people who have been following the journey of MSB. That meant that it should at least appear under the "See More" product area on the front page of PH. But something was wrong. I had more votes than many products but still was not appearing. I appealed to Twitter. I appealed to PH support. For an hour, I was in limbo and I had nothing.

That's what I got some great help from Jake from PH. He let me know that the GIF I was using was too flashy for my thumbnail. That's why I wasn't actually being shown. I quickly changed the gif to a still. There I was, live on Product Hunt actually showing on the front page.

Almost immediately, I shot up to the 4th and the 5th spot and hung there for a couple hours. While answering every comment, and sharing what was happening on Twitter, a long-time follower named Ken Savage helped me out. The guidance he gave is actually what he does for a living so I'm inclined to point you to him. It's what helped me reach the top spot over the next couple hours. 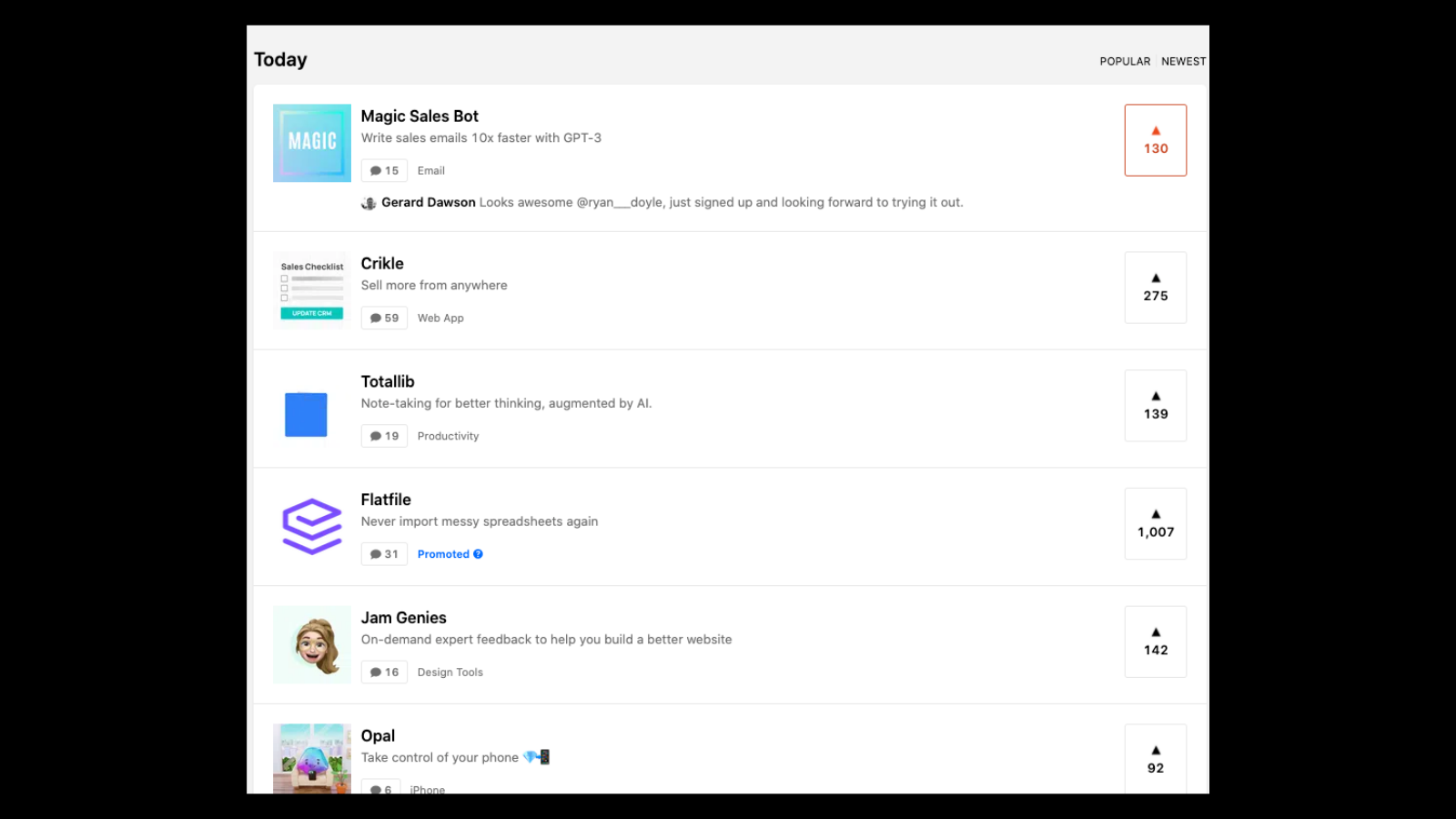 The rest of the day was bonkers. I was getting thousands of hits on my website. I was getting a bunch of chats through my chat widget on my website. A metric ton of emails and signups. I was even getting people signing up for the paid plan without even talking to me first- a new phenomenon for me.

By the end of the day, not only had I hit my 10 customer goal, I was now at 13. Only a month after I had hoped to be there! It was now evident to me, this is a product worth working on.

The next day was all about clearing out my inboxes. They were full from the support questions, comments, acquisition offers, and feedback. I quickly put together a road map that's public-facing so customers can know what I'm working on. 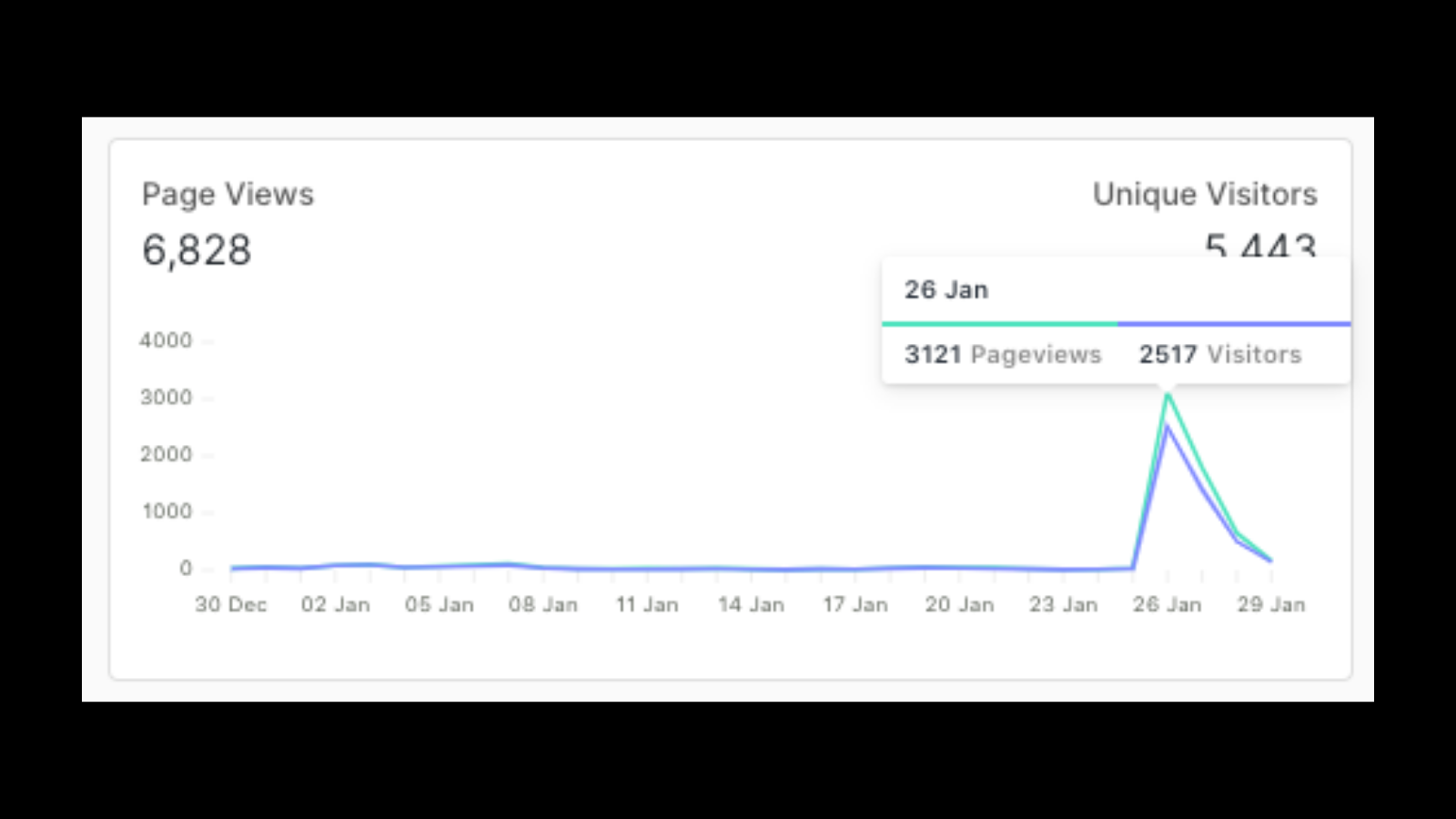 I then shut everything out and took an entire day to ship some of the much-needed newest features. Fixing some of the broken areas on the website, clearing up confusion, and letting users filter what lead they wanted to see by role. Here I sit at the end of the week with 18 customers. Some at the new, higher, price, and 1 yearly customer. There are users from companies like Amazon, Outreach, SalesLoft, and more.

It's an incredible feeling to be here. It feels so validating. There were times where I didn't think that this was going to be any type of project that people would want to partake in. Of course there are still worries now that I'm here with 18 customers, but I feel much more confident in moving this project forward.

Strategy shifts slightly but the game is the same. Incremental product improvements. Talk to customers. Attract new users. Before, customer attraction was happening by building in public and doing direct sales. The new strategy towards that is around content and long-term SEO.

I know that if I can get customers to the website they will sign up. A certain portion will pay. I experienced that phenomenon from the PH launch. Step one is building a stream of users coming from Google. That's why I'm creating posts like this. Like the beginning of the MSB journey, the SEO Journey is something I know very little about. But I know I need to do something. That's how I started MSB, that's how I'll start this portion of the journey.

I'll still keep building in public because it does give me good feedback and eyeballs. I'd love for you to try Magic Sales Bot. It's still free to use without a credit card, I would love your feedback. You can find me on Twitter!